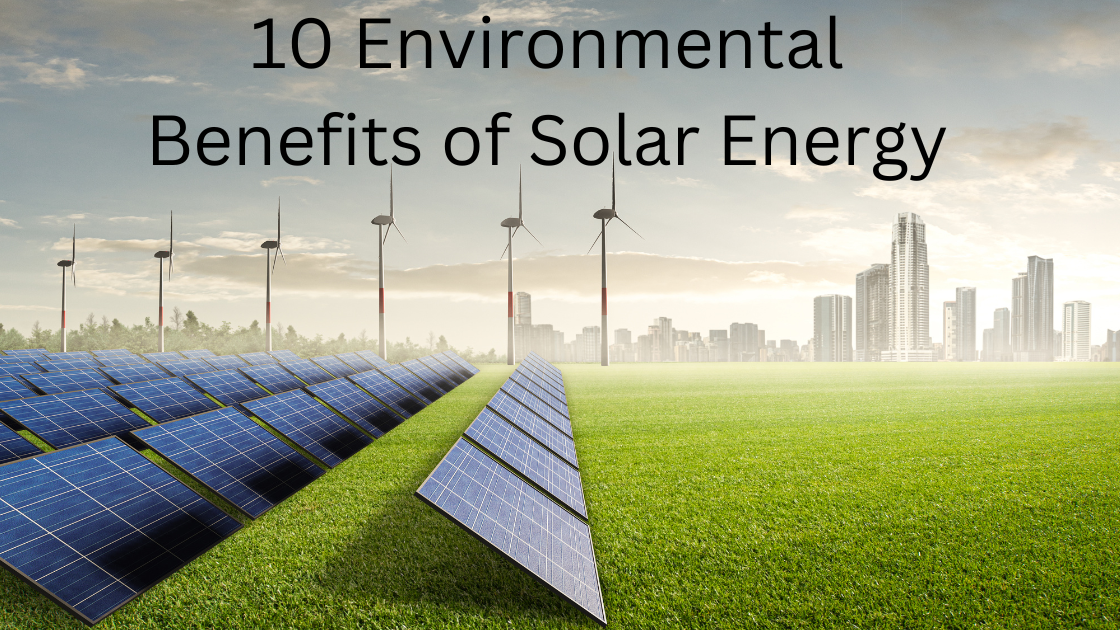 Installing solar panels comes with a lot of benefits, from saving money to taxi rebates and everything in between. In today’s post, I am going to share with you the 10 environmental benefits of solar energy.

What are the environmental benefits of solar energy?

Hydroelectric power is one of the oldest and largest sources of renewable energy. Hydropower currently accounts for 6.3% of total U.S. electricity generation.

The main issue with Hydropower is that uses the natural flow of moving water to generate electricity.

Many sources of electricity like oil, natural gas, and coal involve a process called combustion, one of the by-products of the combustion is the emission of toxic and combustible gases like methane, nitrous oxide, and carbon dioxide.

Since solar panels produce electricity without burning any fossils and do not have any type of combustion, they do not produce any air pollution, they are an effective means of reducing air pollution.

Since the energy produced by solar panels is clean energy, it some not produce any hazardous gases like nitrous oxide, or carbon dioxide, so there is no need to dump or regulate those waste. This reduces the amount of hazardous waste in the environment.

According to the US Department of Energy’s Energy Information Administration, the nation averaged 0.85 pounds of carbon dioxide emissions per kilowatt-hour generated.

Thus, an average 400 W solar panel generating 1.5 kWh per watt per year* will offset 510 pounds of carbon dioxide emissions. Installing solar panels in your home will save the environment today and in the future.

According to the reports, an average American house consumes less than 14KWH every year, replacing this energy with solar panels will have a substantial positive impact on the environment.

Makes the air safe for everyone to breathe

There are days declared as “smog days‘ ‘ where residents are forced to stay in their houses and avoid breathing the outdoor air.

Installing solar panels will reduce air pollution and help everyone to be able to breathe fresh air again.

If you want to measure how good the air you breathe you can use one of the best air monitors available in the market.

I lived in one of the largest coal mines in Africa, this is I can tell you for sure, they take a lot of land space to build those mines. On estimate, solar systems take 3 to 10 acres of land for every megawatt.

Going solar does not only save you money, but also it helps to minimize the land we use to produce energy so that we can use that land to build factories, build houses or produce food.

They say that water is a new oil. This is because Almost three-quarters of the earth’s surface are, in fact, covered with water, but most of it is not usable. Water is the new oil, but what is really usable is scarce and precious.

Fossils and fuels take up large water quantities during power generation. The whole process of transporting fuel, processing, refraining, and even cooling down the generators requires a lot of water.

One of the most important environmental benefits of solar energy is that installing solar panels on your house helps fight global warming by producing electricity that keeps us from burning greenhouse gas-producing fossil fuels. They also shade Earth from the sun.

Those are the 10 environmental benefits of solar energy, it helps our planet in many ways if you want to go solar I will recommend you to do so and help to save the planet.